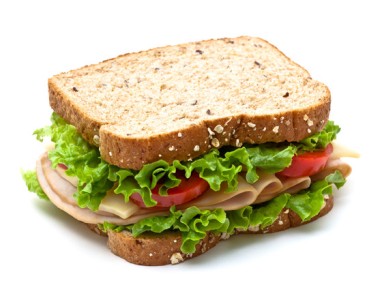 It is made up of many different components. The combinations of such components are practically limitless, but the important thing is that, whatever the combination, the components work together to make a nutritious, well rounded meal. While one may, if they so choose, put some mustard on a piece of lettuce and call it a sandwich, it is not in any way satisfying, and honestly probably won’t taste that good.

So it is with books.

While really good books are like really good sandwiches, some books are sadly lacking in certain areas. The resulting effect on the reader is like that of eating a “sandwich” comprised of merely mustard and lettuce.

Personally, I think the best books are the ones with a good strong structure (none of that limp or crumbly bread please), meaty character development, plenty of flavor, and attention to detail. Though, if I can’t have a whole sandwich, I’ll settle for a good thick piece of meat.

However, some people just like two slices of bread, the skeletal structure of the sandwich, with nothing in between. There is no meat to the story, no details, no real flavor. Or maybe two pieces of bread with just some jalapenos in between: “WE’RE SAVING THE WORLD AND FIGHTING ZOMBIES AND THE ACTION IS NON-STOP”. That exciting sort of flavor that in reality doesn’t have that much taste as it ends up numbing your tongue.

Sometimes the bread is so old and stale because it’s the same bread that has been used OVER AND OVER again such as, I don’t know, that teen dystopian society… bread.  At that point there has to be something really good and original in that sandwich to make up for the cliche-ness of the skeletal structure.

Some people want something really interesting: some buckwheat and almond flour bread with pickled zucchini and cheese that was aged for thirty years and rare mushrooms and reindeer meat. While other people prefer plain and simple: “I JUST WANT PB&J ON WONDERBREAD, OKAY?!?!?!”

There are also the vegetarians, those who want nothing to do with all that “emotional garbage” of character development. Or the low-carb people who care nothing for the structure. For some people it’s all about the flavor. The people who just eat condiments plain.

And then there are the people who just care about that ONE THING. Regardless of whatever else is in the sandwich/book, they must have it because it has that ONE THING in it.

“But…. that sandwich has stale bread and easy cheese-”

Or how about: “What do you want for lunch.”

“I DON’T CARE. THAT PICKLE IS ALL THE SUSTENANCE I NEED.”

There are those people.

The important thing to understand is that everyone has their own tastes in sandwiches, and that’s okay. One is not necessarily better than the other. There is absolutely nothing wrong with being a vegetarian or a low-carb person. So, even though it’s hard for me to comprehend the people who don’t care about turkey and character development tunafish, I just need to accept that they just want pickles and zombies and there’s nothing wrong with that. Even though I feel like if they just understood how EMOTIONAL and AMAZING this piece of ham is they would change their minds, the reality is, they like what tastes good to them and no amount of explaining will change that.

By the way, this sandwich thing applies to writing as well as reading. It’s hard to make a sandwich when you just can’t get the right ingredients.

“I have this story I really want to write… but all I have is a jar of mayonnaise.”

Ransack the grocery store of your mind. Don’t give up on that sandwich.