This past week was…quite a week. Physical and emotional exhaustion have been running rampant through my life, and clearly the only thing to do is retreat to a dark corner of the house to watch Avatar The Last Airbender with my sisters in an effort to make a healthy recovery.

Also writing. I’ve been writing. So today I’m linking up with the wonderful Jem Jones for her One Quirk Later Flashfiction series! 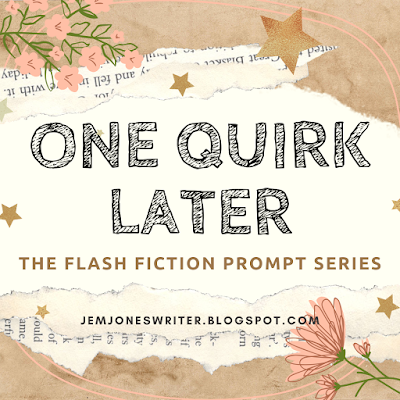 You can (and SHOULD) check out Jem’s post introducing the prompt here. (And read what she wrote for prompts one and two, because do you want to miss out on this family banter and new rules of time travel? No, you don’t.)

A few things about my response to the prompt:

Em and Tabitha’s birthday party was on Saturday. It was pretty lousy, as far as parties went. They’d only moved here a few months ago and didn’t really know anyone yet, but their mother had been determined that their birthday party would be a grand event. She had invited all her co-workers, her co-workers children, the neighbors, and heaven knew who else.

Em couldn’t really blame Tabitha for avoiding the party. She had been tempted to slip away for a while herself. But wasn’t disappearing before the first guest arrived and remaining in hiding for the entire duration of the party a bit much? Em had endured through far too many introductions to people she had no interest in meeting, a handful of party games she was too old for, and so much cake, candy, and punch that her tongue stung. Tabitha had escaped all of it.

Her one consolation was Canon. That wasn’t his real name, but all the kids at school called him that because no one had ever seen him without his Canon camera. He wore it on a strap looped around his neck, snapping pictures of muddy footprints in the hallways, flyers hanging precariously by one thumb-tacked corner on the school bulletin board, or kids sprinting across the soccer field during practice. He took pictures of anything and everything, for no apparent reason. So when Em’s mother decided, for some unfathomable reason, that she wanted a photographer at the party, Em immediately thought of Canon. She’d never really talked to him, but he was in her grade at school (high-school sophomore) and she had noticed him on the first day. There was something about him that made her want to get to know him. And the party was the perfect excuse.

Nearly everyone had gone home by now, but Canon, maybe out of some feeling of duty as the designated photographer and therefore one of the “behind the scenes” people at the party, stayed to help clean up.

“I never saw your sister,” Canon said, standing on a chair to untie a garland from a tree branch. It was a sad-looking garland—a line of brightly-colored paper triangles taped to a string. Somewhere out there was a fun and flawless triangle garland on a pinterest board that her mother had found, but the thing Canon was currently struggling to untangle from a tree branch was, at best, a distant cousin to whatever picture her mother had been following.

“Especially not her own.”

The garland finally came free of the tree, fluttering to the ground like a lopsided bird that didn’t even care anymore. Em reached for it, but Canon said, “Wait!” so suddenly that she stopped, startled.

Canon raised his camera to his eye and snapped a picture of the crumpled garland. Lowering the camera, he gazed at the mess of triangles and string for a moment more, head tilted to one side. Then his face turned red and he looked up. “Sorry. It’s not for your mom—not for the party pictures. Just…for me.”

Em shrugged. “You don’t have to be sorry.”

Canon nodded. Em set about the task of wrangling the garland into the garbage can she had been dragging around.

She glanced up and saw him scratching at the back of his neck with one hand, not quite looking at her.

They moved onto the next tree where a cluster of balloons were half-hanging from a branch, leaking helium but still making an attempt to float. Canon climbed up on the chair again and started working away at the horrendous mess of knots. Em had a nagging feeling that she should be the one doing most of the work—it was her party after all—but Canon was taller and, for no reason Em could understand, her mother had tied everything as high up in the trees as she could reach.

So Em watched Canon work, his camera hanging around his neck, resting against his chest. Like a heart, Em thought. A heart with a shutter.

“So you and your sister are twins?” Canon asked.

“It’s a birthday party for both of you, right?”

Em sighed. “Yeah. We have the same birthday, but we’re not twins.”

“We were born on the same day, just separated by five years.”

Canon stopped picking at the knots and stared at her. “Seriously?”

“Yeah. Crazy, right? What are the odds?”

“Crazy,” Canon agreed, eyes wide. His hand strayed to his camera, but there wasn’t a way to take a picture of that fact.

“So the thing about Tabitha,” Em said, louder than necessary, “is that she’s a huge coward. And a jerk.”

“I heard that!” a voice shouted from above.

Canon almost fell off the chair.

Em looked up into the branches above them and grinned. “You were supposed to!”

“You’re the rude one. You left me to handle the party all by myself.”

“You could have left.”

“Except I have a conscience.”

Tabitha snorted. “Whose fault is that?”

“You have to meet my friend Canon.”

“You don’t make friends with a cannon,” Tabitha said scornfully. “You don’t meet a cannon. You shoot a cannon.”

“Go get mom and I’ll climb even higher. I could spend the night up here.” But she started climbing down.

“This is Canon,” Em said as Tabitha reached the lowest branch. “He’s a photographer.”

Tabitha glared at Canon. “If you try to take a picture of me, I will smash that camera and cram the pieces down your throat.”

“Stop calling me that.”

“Do you prefer to be called Tabitha?” Canon asked hesitantly.

Tabitha’s glare intensified. “I prefer to be called The Grim Reaper.”

Em rolled her eyes. “So now you’ve met my sister. Isn’t she delightful? Let’s go find my mom and see about paying you.”

Many thanks to Jem Jones for the prompt! Be sure to go check out her blog! She’s wonderful, the blog’s wonderful, it’s all wonderful.

If you want to join, please do! I would LOVE to read what you would write for this prompt. Be sure to link-back to Jem and comment on one of her posts so she can read what you wrote too!

What comes to mind when you see the prompt? Have you watched Avatar The Last Airbender? Have you done any re-reads lately? Have you read A Thousand Perfect Notes? Are you the type that would run away from your own party? Do tell!

12 thoughts on “One Quirk Later Flashfiction–sisters, banter, and sad balloons”